Get in touch with us

I’m just going to come out and say it. I love Chatter. It wasn’t a love at first sight thing – I was actually opposed to it at first. Facebook for business? Really? But as I began to use the functionality more and more on project work, I began to realize the collaborative potential it afforded me and my team as we worked together to provide solutions to our client’s challenges. 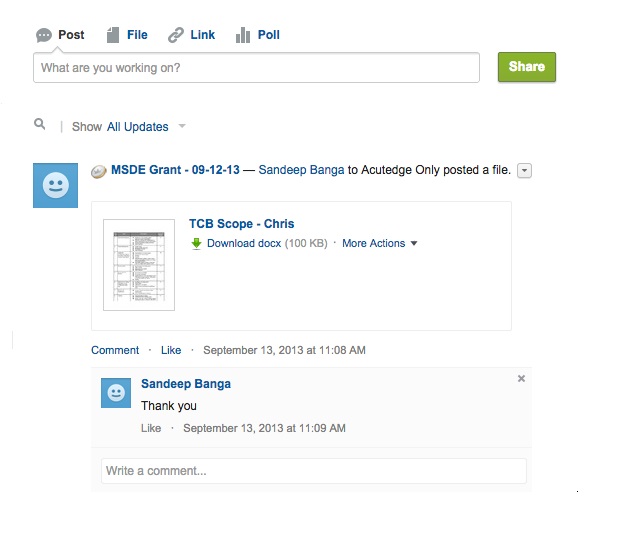 And as I began to adopt it professionally, I began to incorporate it more and more into my solution designs, opting for the near real-time power of Chatter over the old-guard paradigm of email only. And the more I used it, and the more functionality Salesforce released, the more my affections for the Collaborative Cloud grew. As I began to think through the “why” behind my love affair with Chatter, I came to this conclusion:

Salesforce is an amazing tool, but it is essentially a relational database with a world class user interface. Organizations, Contacts, Donations – these are simply 0’s and 1’s stored inside a server farm somewhere in the world. When I access a record, I am presented with concrete facts – this Organization gave a huge amount last year, this large Donations has been received, this Contact’s phone number has letters in it (why are we using a custom text field to capture phone numbers?), etc.

But with Chatter, the record’s feed breathes life into the cold, hard data. Activities are posted, communal knowledge is disseminated, accolades are given, and the occasional inside joke is born, bringing a welcome vibrancy to a once static collection of fields and related lists. With Chatter, a record isn’t just a record, it’s an opportunity for life to happen.

I love Chatter. It’s an amazing tool that draws users into relationship with one another and fosters a community on mission. Data is important, but is meant to be acted on. Chatter gives non-profits the ability to empower its users to be a part of the cause in tangible ways, and provides a conduit for productive activity that takes data and does beautiful, world changing things with it.

Nate Hembree is a husband, father of two boys, consultant to non-profits, and considered by many to be quite tall. He enjoys helping non-profits leverage the transformational power of Salesforce to do good better.

Want to stay up to date with Salesforce tips and Acutedge news?

@Acutedge We welcome @ajsawhney2 as our new Managing Director, Professional Services! #excited #transformation #innovation… https://t.co/Zb7uBiFZ7x
@Acutedge In Boston for the @MassCouncil conference. Excited to connect and learn from #casemanagers and enjoy some… https://t.co/m3lSrgBwHn
@Acutedge At the NACM in #philly talking to #casemanagers. Met several great folks from @DBHIDS @PHMCtweets and @Resources4HD… https://t.co/MhP61t4gc9